oybeans, much like corn, need to imbibe (take in) water for the germination process to take place. The difference is that soybeans need to take in 50 percent of its weight in water to start this process compared to 30 percent for corn. Since soybeans are about two-thirds the weight of corn, the actual amount of water needed to germinate is very similar. 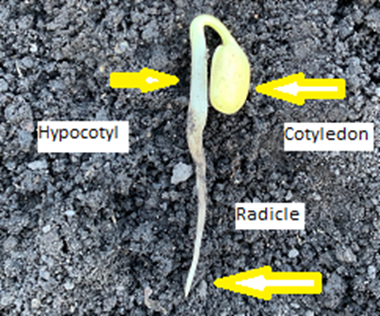 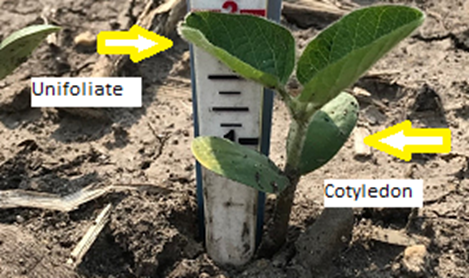 As we seemed to transition from winter straight to summer, the heat wave is pushing the crop out of the ground very quickly. While our crops can only utilize heat units after being planted, insect lifecycles do not wait. The heat accelerates pest growth just like it does to your corn and soybeans, making it especially challenging to control pests in a timely manner. Whether you are nearing completion of your planting activities, or if you are only getting started, keep a pulse on these pests in your area.

Flights this year picked up during mid-April in Indiana and Illinois, with much of Michigan, Wisconsin, Minnesota and South Dakota seeing an increase in the first week of May. The first hatch typically occurs 300 GDUs later, meaning that the feeding window is open now in parts of Indiana and Illinois. Peak feeding could still happen towards the end of May and into June depending on if we are yet to experience the peak flight. Watch weedy, high residue or cover crop areas first. Soil applied insecticides and foliar insecticides offer good control. For the later, be sure to scout corn for 2 to 5 percent plant cutting (depending on the age of the larvae population) before deciding to treat.

All of Dairyland Seed’s Qrome®, AcreMax®, AcreMax® XTreme and SmartStax® corn hybrids offer Bt control of black cutworm. Just remember that an insect must feed on plant tissue for the Bt to work. Therefore, cutworms can still do some damage to newly emerged corn, but the protein will prevent most “down the row” feeding.

True armyworm (TAW) migrations are more difficult to time each spring and tend to be localized. Issues can arise at nearly any corn stage, so monitoring the various trapping networks is key to picking up on this pest. Southern Indiana has seen some trap increases, but otherwise 2022 has been quiet. TAWs are defoliators that favor grassy areas. Watch field edges and cereal crops closely for early indicators. In corn, treatment requires 25 percent of plants to have 2 larvae or 75 percent of plants to have 1 larva. A limited number of Bt traits offer control of TAW.

Bean Leaf Beetles (BLB) are likely the most widespread early season soybean pest. BLB show up in two generations each year; the first one being associated with overwintering beetles. The first generation is likely suppressed this year due to the widespread lack of snow cover. BLBs look very similar to corn rootworm beetles, but can be identified with a black triangular mark just behind the head. Three beetles per plant at the unifoliate growth stage or earlier may warrant treatment, as does 30 percent defoliation from the V1-V7 growth stages.

The Alfalfa Weevil is starting to show up in parts of the Midwest on first crop alfalfa. Hot spots are popping up in Indiana and last week’s heat wave has pushed GDUs to the point of egg hatch and beyond for most of the Midwest.

From South Dakota, across southern Minnesota, through most of Wisconsin, Michigan and to the south, we have enough heat units to see third instar larvae. More northern reaches might be just past the egg hatch, but could see larvae soon. Watch for feeding now during first crop and early into second crop, rarely do issues show up in third or fourth crop.

The pale-green larvae have black heads and tend to feed on the young growth at the top of the plants. Adults are gray beetles with a small snout. The University of Wisconsin recommends control when 40 percent of first crop plants show signs of feeding. Do not confuse this with 40 percent defoliation! If 40 percent of the plants are experiencing feeding and harvest is more than 10 days out, consider spraying an insecticide to manage the weevils. If the normal cutting schedule puts harvest at less than 10 days, go cut immediately. Early harvest will save an insecticide application. Especially with the early harvest strategy, watch second crop regrowth carefully for continued feeding. If weevils are present and regrowth does not start 3 to 4 days after cutting, spray with an insecticide immediately. 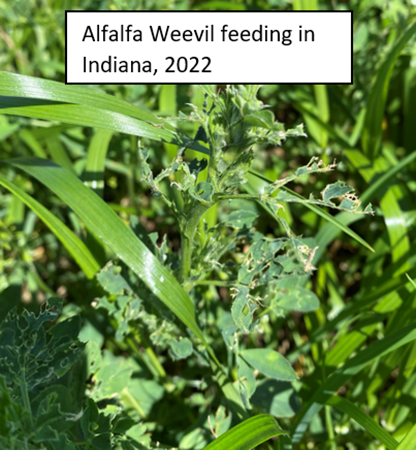 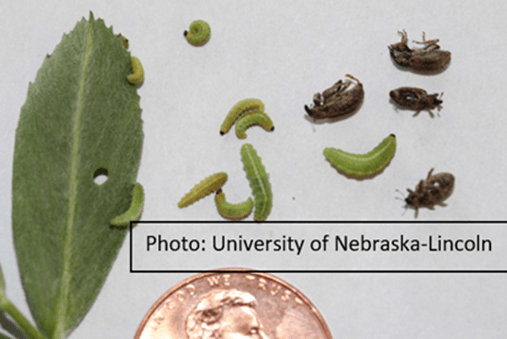 Enjoying our Agronomy Updates? Suggestions for topics you'd like us to weigh in on? Drop us an email at dairylandseed@dairylandseed.com. We'd love to hear from you!