Knights do not gather at the round table located in Brian Bjugstad’s shed. Nonetheless, the common laminated table, so unloved a few years back that it was hours from taking up permanent residence in a landfill, is becoming the stuff of legend.

Brian runs around 2,000 acres of corn, soybeans and canning crops at Bjugstad Farms in Evansville, Wis., about a half hour south of the state capitol, Madison. He does custom work on 300 to 400 acres. Five years ago, he started selling Dairyland Seed. 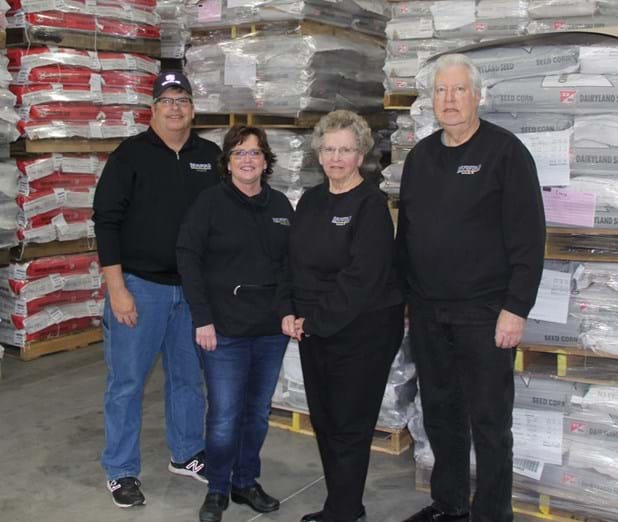 He grew up down the road from where he lives today. Across the street from his childhood home, his grandpa, Norm Krumwiede, ran a dairy. As a kid, Brian worked there a lot. Norm was a huge influence on him. “I was always with him,” Brian says.

At 25 years old, Brian started renting his own land while still working with his grandpa. He milked cows until he suffered a farm accident at the age of 32. Piece by piece, with setbacks along the way, he got to where he is today.

“After my grandpa passed away, I continued farming with my uncles,” Brian says. “Years later, my uncle invited me to combine our operations. We were going strong for 10 years. Then he brought a son back into the operation. I’ve been on my own for the past six years,” he says.

Brian is happy with how things have turned out for him. His wife, Renee, loves teaching third graders in town. His son, Tom, is a strength coach for the University of Utah Athletic department. His daughter, Maria, is a fourth-grade teacher who lives down the road from him and Renee. His parents, Oscar and Norma, are vital to helping him run his farm. Another uncle, who is semi-retired, helps him during the busy seasons. Beyond family, he calls on several part-time people to help out.

“My parents are on call for me, running here and there to pick up parts or whatever’s needed,” Brian says. “They do a lot.”

And then there’s the round table. It’s not an employee. It doesn’t have a name. But it’s proven important to Brian’s business success.

Brian’s Dairyland Seed District Manager, Chad Butts, knows all about the round table. He explains that, as his district grew, Dairyland Seed dealers kept outgrowing storage. One day, Brian floated the idea of putting up a new shed on his land, something he’d been wanting anyway.

He built it – 8,000 square feet, enough space to fit several semi-truck loads of seed if needed. After they unloaded the first load of seed in December of 2019, Chad took Brian to check out what he had in storage. 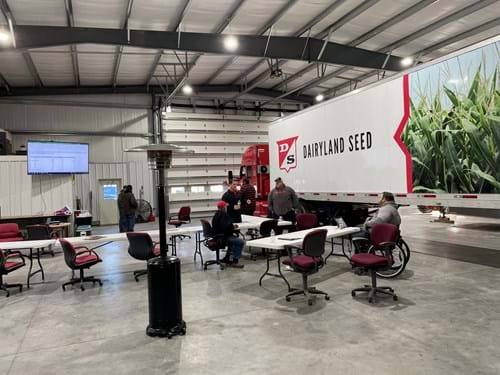 fellow seed dealers and dairyland seed team members begin to gather for one of many district meetings held in brian’s shed.

“I had a bunch of furniture that my wife’s office was on the verge of throwing out a year and half earlier,” Chad says, “so I grabbed it and stored it, thinking it might come in handy one day. When I showed it to Brian, he said he’d take a desk and a chair. I said to take the round table too, but he said, ‘What the heck do I need a round table for?’”

Chad’s voice rises as he recounts the moment. “’Trust me,’ I told him. Just take the darn table.”

Brian nods and smiles in agreement. “It’s unreal,” he says. 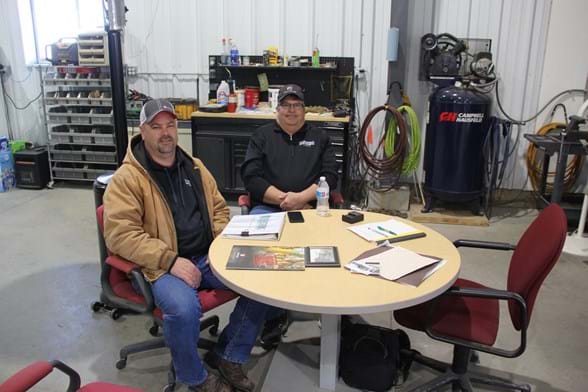 What Brian has accomplished in just five years, Chad says, has helped Dairyland Seed immensely. Brian and his round table host everything from regional meetings to district meetings. Customers, interested farmers, Dairyland Seed staff – they all come. He hung an 86-inch flat screen TV on a wall above the table for large Zoom meetings or cheering on their favorite sports teams with family and friends.

Brian never had the goal to become a seed dealer. “Chad kept telling me how great it would be, how I’d learn more about seed and all that. He just kept asking,” says Brian. He shakes his head and laughs at the memory, “Turned out to be everything he promised.”

Among his popular varieties are DSR-2640E™ brand beans, for which he won the Dairyland Seed Soybean Yieldmaster Contest, coming in at 111 bushels per acre. He has high hopes for DSR-2562E™brand, a new variety this year. And for corn, farmers love DS-4510Q™ brand. Brian sold out of it this year. “Dairyland has some good corn. I’d put it up against anybody’s,” he says.

Back on his own farm, Brian’s long-term goal is to keep it going, keep paying down equipment debt, and possibly expand a bit, “but acres are hard to come by,” he says. He will continue adding technology to save more money and improve precision and efficiency. One of his goals is to set a new yield record, this time with Dairyland Seed corn. He’s aiming for 300 bushels.

He doesn’t think he will ever retire. “What else you going to do?” he laughs. “I love farming. It’s in my genes, I like being outside, working for myself.”

And with that, another successful meeting at the round table comes to a close.