Where some people see seed, Mark LeGare sees an opportunity to grow his business, his intellect and customer businesses. Mark is a long-time Dairyland Seed advocate, seller and production grower. Forty years or so and counting, but who’s counting?

He grew up farming with his father and growing Dairyland Seed alfalfa in Lafayette, Minn. He doesn’t calculate the years or the seed company mergers. He’s a family man (married with four daughters) working with a family company, loving what he does, and that’s all that matters.

Mark nurtures about 300 acres of corn and soybeans, marketing the corn and producing the beans for Dairyland Seed. He says raising seed gets him a bit of a premium for a little bit of extra work cleaning his equipment. 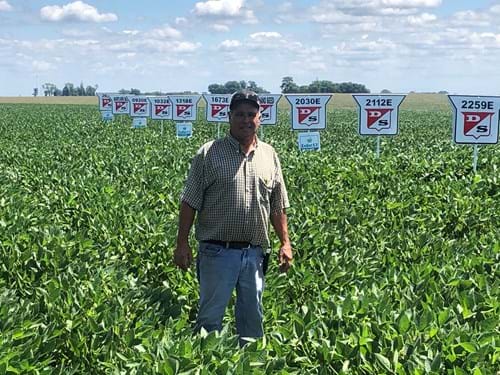 Mark stands among Dairyland Seed brand Enlist E3® soybeans in one of his test plots.

Karl Steckelberg, Mark’s Dairyland DSM, has another perspective on what it means to be a production grower.

“A select few get to do this,” Karl says. “You pretty much have to be great at what you do. I’m talking about minimum fertility levels, weed-free fields, attention to detail, enthusiasm for following an extensive cleaning process like running wood shavings through your equipment to make sure you’re growing a pure, high-quality product. There aren’t a lot of seed production growers out there.”

Given Mark’s innate desire to learn and improve as if each day was his first day on the job, it’s no surprise he also has a thing for growing plots. Not just typical plots, but regional training plots, known as RST (Regional Sales Training) plots. He has one of only four Dairyland RSTs in Minnesota.

Mark works with Karl to invite customers to his RST plot for training, opening up his farm to other farmers and dealers too. It’s a somewhat uncommon gesture, but he believes in equal-opportunity education. Dairyland, grateful to have Mark on its team, uses the RST throughout the year for various training exercises, including sales staff training.

“He’s hungry for information,” Karl says. “He’s a constant self-improver eager to bring new ideas to his customers. He’s expanding his facility and adding footage for more seed storage. For how long he’s been at this, his appetite for meeting new people and pursuing new business is remarkable.” 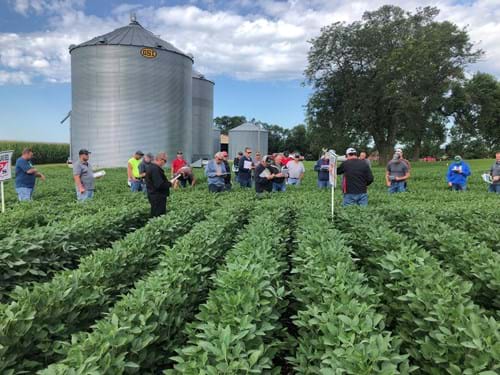 Farmers gather at the Dairyland RST plot on Mark LeGare’s farm, one of only four RSTs in Minn. Dairyland agronomist Brian Weller leads the training.

Mark says he wants to keep selling seed, but doesn’t put a time frame on his future plans.

There are more important things to think about, like customers, the abundant competition in his area and new genetics.

He says that with the lineup he now has, guys are looking a little harder at his offering. Interest isn’t likely to subside. The next generation of Enlist E3® soybeans comes out in 2023 in Dairyland bags only. Other seed companies won’t have the same genetics.

“The genetics will be even better. In the last 10 years, there’s been a lot more change throughout farming than there has in my first 30 years on the farm. Technology today is pretty amazing and there’s so much more to come. I don’t think we’ve seen anything yet,” Mark says.

One thing that hasn’t changed is his perception of Dairyland Seed. “We still have a family feel to the company,” he says, a remark telling for his use of “we” over “they.” 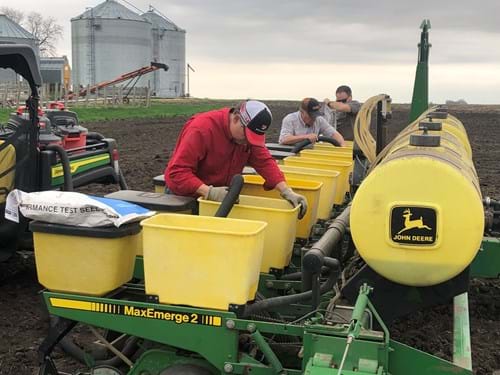 The advantages of being a dealer have remained constant as well. You meet a lot of new people and learn a lot by talking with other farmers, who Mark says deal in cold, hard facts.

“You sort of watch some of the older guys for what they have done over the years and see what has worked for them, and you learn from them,” he says.

To sell them seed, he says you have to be a competitor. But not too pushy. Once a farmer is willing to try your seed, you take it slowly from there. When they’re ready to buy, you’ll usually know. “Sometimes I get a call to buy when I least expect it. It’s a good feeling,” Mark says.

Mark does the job right. He’s always ready to learn, eager to teach and zealous when it comes to solving problems. He builds trust. After about four decades of planting and selling one seed brand, Mark says people know you’re a believer.

If actions speak louder than words, Mark appears ready to give it another 40 years.